"LOOSE GUNS
Israeli Controlled Small Arms in the Civil Sphere:
How Many Guns and How Much Control?" 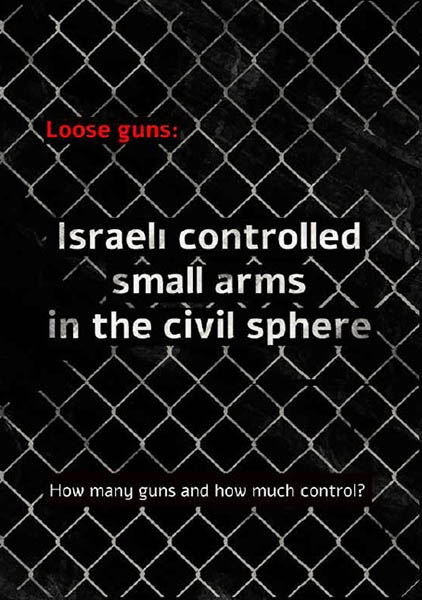 A first-ever account of the proliferation of small arms in the civil sphere within Israel and in the territories it controls, this report outlines which institutions and which people bear handguns and rifles, who is responsible for controlling them, and how that control is exercised.

The report openly takes a stand that is also supported by its findings: The widespread proliferation of firearms does not provide security. Focusing on the accumulation of injurious and lethal effects of guns in the civil sphere, the report traces how these disrupt and even dismantle aspects of the social order. An array of (mostly) civilian victims demonstrates some of the risks and damages of multiplying small arms, supporting a conclusion shared in past by top officials in security and civilian institutions:

The civil sphere in Israel and in the territories under its control are over-armed. As the report findings show, this over-armament is accompanied and supported by a severe lack of data, and by excessively weak control of the small arms for which the state of Israel is responsible.

Top public security officials agree or agreed in past on the pressing need for selective disarmament designed to reduce the dangerous level of over-armament that they identified. Realizing such a policy, however, depends on the availability of precise, reliable data on the numbers and dispersion of small arms throughout the civil sphere. Translating small arms policy into a practical reality needs a comprehensive database on the guns carried and stored and moving through those spaces that are populated mostly by civilians. Such a database must include the small arms of all the armed organizations that share and move through these civil spaces, along with the arms of private citizens.

This attempt to lay foundations for such a stock-taking is being carried out from the independent, non-institutional standpoint of activists who firmly believe in democratic civil participation in the operations of authorities, and in carefully monitoring their planning and implementation through gender-sensitive and minority-sensitive lenses. The report, written from a clearly acknowledged standpoint, is a necessary tool for understanding the past moves of executive bodies, subject to a declared policy of selective small arms disarmament, and those of the current government claimed to accelerate an ostensibly balanced armament. As clearly demonstrated by the data collected and presented in the report, civil control of firearms and their uses is urgent.

Queries to the executive bodies in charge of small arms in Israel demonstrated that civil society is not provided with comprehensive data. Some unanswered questions indicated actual failures to collect vital data. Despite discernible efforts, even the Ministry of Public Security rejected 32% of questions submitted, mostly (22%) on claimed security grounds. It did, however, report 293,000 civilian arms registered in 2013. 11,000 to 25,000 military arms (including settlers’ military arms) were estimably circulating through the civil spaces in and controlled by Israel, as well as least 26,300 arms of “independent licensing bodies” (police, Prison Service, and Knesset Guard). Accordingly, a very conservative estimate of the number of licensed small arms permeating the civil sphere is 311,000 to 326,000. An added cache of illegal arms has been claimed to number hundreds of thousands.

Israel’s Jewish majority tends to view small arms as enabling a secure, protected space. Discernible in recent years, however, is a degree of change in this perception, both in the public at large and among decision makers. This shift in perceptions didn’t result from the incidents themselves, which were seen as separate, individual tragedies. Rather, it was the identification and publication of a common enabling factor, by the Gun Free Kitchen Tables (GFKT) initiative, that generated new awareness of the phenomenon. All these killings were enabled by the available guns of security firms, which were illegally sent into guards’ homes. This in turn led to widespread recognition of a correlation between the recurring killings and a long time policy of non-enforcement. GFKT advocacy thus played a key role in exposing an existing, unnoticed phenomenon and in positioning it as an issue demanding policy change.

Concurrently, GFKT galvanized a growing public awareness that small arms in the home and family multiply the risks faced by women and the chances of women’s murders, while increasing the risks of murder and suicide overall. The initiative publicized existing, strong evidence for drops in women’s murders in families in conditions of increased gun control and tightened small arms legislation and enforcement (both worldwide and in Israel). Public consciousness began to register that reduced firearm availability in homes reduces the risk of homicide, particularly of women. This new knowledge, integrated into the systematic data collection presented by GFKT, succeeded in kick-starting a move that disarmed tens of thousands of homes, alleviating threats to thousands of women and many children and men.

Years of non-enforcement of the law requiring security firms to store guards’ guns at their places of employment merely formed part of a much broader trend. The report discusses a comprehensive policy of selective non-enforcement of gun laws directly affecting and damaging a variety of communities. This systemic practice is motivated, the authors claim, by political and economic interests, and first and foremost by a bid to maximize the control exercised by the institutions of the ruling Jewish majority. Non-enforcement is applied in different ways within the boundaries of the “green line” (internationally recognized as Israel’s borders) and beyond them, in Jewish and Palestinian communities. It effectively denies protective civilian measures to the members of a range of different groups. A distinctly gendered aspect is built-in to this policy, as it serves to oppress disadvantaged populations, directly injuring women and particularly those from excluded groups.

Alongside systematic and selective non-enforcement of gun laws, this policy further comprises a refusal to provide existing data and an avoidance of methodical data collection on small arms proliferation, gun crime and damages incurred by firearms. These are, as noted, vital to conducting a responsible, transparent and democratic implementation of small arms policy.

The present report lays the groundwork for further research, data collection and new action on the part of civil society, expanding the initial discussion of security firms’ arms to all arms present in the civil sphere and to over-armament as a preventable phenomenon demanding practical steps. It meanwhile provides a platform for re-emphasizing the over-militarization of society and state in Israel through a critical, feminist discussion of concrete issues regarding arms and their normalization.

Updates from the Kitchen Table

We need your support!

donate by Paypal or credit card